November 13, 2018
It was a sad day to see the Dardanelles Cenotaph uprooted from the South Parklands and transported to a side street in Adelaide.
Over the past year I had joined local residents in Adelaide and Unley to protest the planned removal.
It had been paid for by the Unley (and Adelaide) widows of soldiers killed in the Dardanelles.
It was the first WW1 memorial. Funded 100% by local residents.
It was a travesty by the Adelaide City Council.
There was no real consultation.
A real shame.
May Adelaide City Council hang its head in shame. 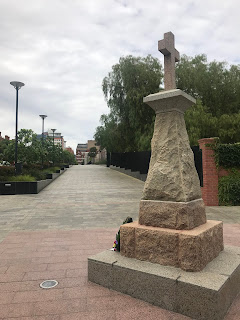 The Dardanelles Cenotaph, uprooted and plonked in a side street in Adelaide.
Compared with where it was, it looks so out of place.