Showing posts from September, 2017
Show All

September 27, 2017
On Monday 25 September 2017 I moved the following motion at Unley Council. That: The City of Unley Council writes to the Minister for Planning and expresses its concern about the lack of consultation by DPTI with the local community about the proposed Inner & Middle Metropolitan Corridors (Sites) Ministerial DPA, and particularly for the site comprising 12 to 30 Anzac Highway and 6 to 14 Third Avenue, Everard Park between KFC and Solver Paints on Anzac Highway and extending through to the local minor residential street at the rear in Third Avenue, Forestville. Why? Outraged locals in Forestville and Everard Park, especially in Grove Avenue about zero consultation by the Minister for Planning with regard to the mega development on this site. Locals only learnt about the proposal in a recent newspaper article. I would hope that when the Minister gets a letter of concern from Unley Council, he will undertake further consultation with the Everard Park and Forestville residents.
Post a Comment
Read more 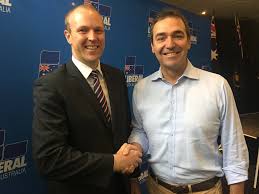 Following private chats with Councillors last night I am revising (down by 1) the number of probable candidates who will try to be stand-in Mayor of Unley when Lachlan Clyne resigns in Jan/Feb 2018. Given the high number of candidates, it's relatively easy to determine what the outcome will be. If I'm right, it will be a good outcome. No, I won't share the names.
Post a Comment
Read more

The Mayor of Unley, Lachlan Clyne, has taken paid leave for 3 months whilst he campaigns as the Liberal candidate for the State seat of Badcoe (formerly Ashford). His stated intention is to resign as Mayor in January 2018. That will leave Unley for a period of 8-9 months without a Mayor elected by the people. The expectation is that Council will elect a stand-in Mayor to captain the good ship Unley. With due respect to whoever gets the gig, we will effectively be leaderless and at times (I suspect) with a broken rudder. With Council elections approaching in late 2018, there normally are some associated disruptions to the smooth functioning of Council which will aggravate the situation. The Council meeting in January or February 2018 should be a real doozie. From chats with some Councillors, I have it on very good authority that there will probably be seven (7) Councillors who will nominate to become the stand-in Mayor. Six (6) are definite starters. I suspect that our current vo
Post a Comment
Read more

What a buzz it was at Adelaide Oval yesterday to watch the Sturt vs. Port SANFL Grand Final. A huge crowd of 38,000. It was a fantastic win by Sturt by just one point (50 vs. 49). The first 2 quarters went well for Sturt. Port couldn't kick straight and spent more time going for the man rather than the ball. In the 3rd quarter Sturt could have done better. They lost momentum. The 4th quarter looked more like a 27 minute rugby scrum with very little ball movement and Port increased their attacks on the man. All up, it was a great win by Sturt. We must have an Unley Council function to recognise and celebrate the win.
Post a Comment
Read more

September 22, 2017
I hear that Cr Mike Hudson is not wheelie good. Or should I say, his $400 four door car is no longer in good shape. The cops took a dislike, probably attracted by the non functioning brake lights, and defected the car. The cost of repairs was five times the value of the car. So, Mike has decided to walk or try to borrow his wife's car. Which probably explains why I saw Mike window shopping at an Unley bicycle shop. Anyone with a secondhand bike that they want to sell, just contact Mike Hudson at Unley Council.
Post a Comment
Read more

Pulled over by the Police

September 07, 2017
What to do when pulled over by the police? Know your rights and politely exercise them. I never carry a driver's licence. There is no legal need to in South Australia unless travelling on holiday. Have a read of your rights. Remember to be polite
Post a Comment
Read more

September 04, 2017
There's been a lot of comment and debate about the impending postal vote for same sex marriage. I won't go into that. However, an interesting comment I heard from a commentator was that they may need to provide explicit details on how to return the vote ie. How to post the vote back. Many of today's youth have never posted a letter in their life. So they will need to be told to: Mark the voting paper and place in the envelope Lick the back of the envelope and seal it Take the letter to a Post Office or find a red box on the street and insert in the box (before 6pm) Actually, the best way to get the message across is via a video demonstrating how to post a letter on YouTube.
Post a Comment
Read more
More posts