January 02, 2017
Soon to be considered by Unley Council is the matter of what to do about the trip hazards on the footpaths.
There seems to be less on the old bitumen footpaths compared with the new brick pavements.
Seriously, perhaps we should consider returning to bitumen. That was one idea I proposed at a recent workshop. Despite it having merit that proposal wouldn't get through Council.

The matter of what to do about trip hazards has been the subject of several workshops.
There have been many proposals and variations.
I insisted that the criteria (for a trip hazard) be applied equally across all footpaths in Unley. An earlier proposal had different trip tolerance heights (eg. 20mm vs. 15mm vs. 10-15mm) in different streets. That was totally unacceptable. That inequity will not be in the proposal to come to Council.
The trip hazard criteria will now be applied equally across Unley, from Black Forest to Fullarton.

The options that Council will consider are:
I coined the term splotches to describe the temporary bitumen patches.
It is a good idea (and a big cost saving), but it won't be accepted by Council; trust me.
Splotches would become highly visible across Unley and wouldn't be accepted by the residents.
It has been described as 'just not Unley'.

For the record, I was quick to accept the idea of splotches; enticed by the big cost saving.
However, after sleeping on it I came to the realisation that it was just not acceptable for Unley.

The photo below shows what a splotch would look like ... 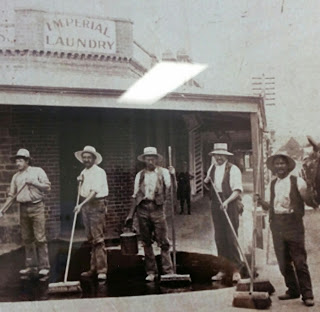