July 11, 2016
Last Wednesday I attended the launch of Pokemon Go in Unley; actually in Everard Park. Downloaded to my son's phone.
After just a few days, Pokemon Go has become a killer app.
It's being used by kids, youth, young men and women, older men and women and Mums and Dads. It's wild; totally sick.
There are virtual Pokemons everywhere. They hang out at Pokestops and do battle at a Gym. Typically they can be found at parks, schools, community centres, historical locations, public swimming pools, libraries, ... everywhere; even in the home and in the backyard. One was seen perching on my shoulder. I even felt it.
On the positive side it gets people out and about, wandering the streets looking for them and doing battle at a Gym.
On the negative side, people are driving around, parking in front of Pokestops and on street corners; in dangerous locations. This app will cause accidents.
My whole family (except for me) are into it; it's become totally obsessive. I'm fighting the urge.
If I drive to the baker or butcher (or wherever) someone wants to come with me to collect Pokemons. Previously, no one wanted to accompany me to the baker or butcher.
It's a killer app and really sick.
It's quickly captivated a huge number of people and they are getting addicted and obsessive.
It would be nice to just go back to discussing politics, the assorted independents in the Senate, the weather or the tram timetable; now it's all about Pokemon Go.

Today I went for a drive to get something and everyone piled in the car. It was the longest simple shopping trip ever; we had to visit all the local parks, churches, swimming pool etc. Yesterday I went up to the Barossa and in the local towns I had to slow down to 15kph so that we could collect Pokemons. Totally sick.

In the photo below is a Doduo Pokemon found whilst out walking the dog.
I know that they are virtual beasts, but I'm sure that dog knew that the Pokemo n was standing on the footpath just in front. Dogs can sense these things.

Warning: if you download the app you will become totally obsessed.
more about Pokemon Go 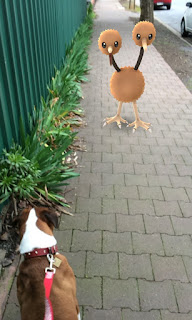