July 07, 2016
I have received questions from residents about street trees and the process for their replacement when they become end of life, unhealthy or are severely damaging infrastructure eg. the kerb, footpath and underground services. In particular, concerns are being raised by residents in Charles Street, Forestville. The street (particularly the southern end) is bird city with the big native gums full of bird attracting blossom.

I put some questions to Unley Council and here are the responses (with my minor edit). Hopefully this will help to provide clarity.

Question:
Is there a reference on the website about the selection of street trees?
Answer:
No. Most streets have a nominated preferred replacement species which is based on the dominant species in the street.

Question:
Does Council offer residents a choice and take a vote in the street? (Like what used to happen several years ago.)
Answer:
This only occurs when we undertake a detailed review of a street as part of a streetscape program ie. when the road, kerbing and footpaths are reconstructed. A recent example of where this occurred was Ferguson Avenue at Myrtle Bank. This can often be a long process to reach a position of consensus.

Question:
What is the plan for the trees in Charles Street? What type of tree and is it a rolling plan of replacement over several years or in one hit?
Answer:
As you would be aware the southern end of Charles Street has been quite controversial over the years. We have undertaken a couple surveys of residents over the last 10 years and while there has been some strong support to remove and replace the trees this has been offset by some strong objections. At this stage we are addressing requests for removal on individual bases. The native Wilga has been selected as a replacement to try and maintain a native theme for this end of the street. There have been no objections to the selected Wilga. The Wilga is a lovely small native which is being planted in streets with narrow footpaths.
The northern end of Charles Street was reviewed about 10 years ago and through street consultation the Ornamental Pear was chosen as the preferred replacement species. The current position is that Council will only remove and replace trees that warrant removal. There is reluctance to remove healthy trees for no reason.

Where to find a Wilga tree to see an example of this native?
Have a look in Austell Street, Unley (just in behind the Unley Shopping Centre off Mary Street). Also there is a nice example at 2 Louisa Street, Goodwood.

The photo attached is a Wilga in Unley. 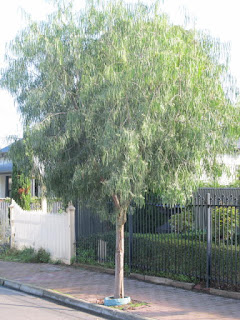