Showing posts from April, 2016
Show All

April 29, 2016
Pets, especially dogs, are good for your health. They are very understanding and help to soothe the pain during troubled times. In general, in my opinion, people with pets are of better nature; more compatible members of society. I was interested in the results of a study by canine scientist and PhD student Mia Cobb and sports scientist Dr Craig Duncan. It showed that when a dog and its owner were in close proximity their heartbeats were significantly lower. Dogs and their owners were strapped with heart monitors and after initial separation, when reunited together on a couch both dog and the owner where found to have heartbeats that dipped or rose in synchronisation. An amazing discovery 🐕 I bet the same isn't true for cats. I'm sure that they would maintain a steady heartbeat; whatever 🐱
1 comment
Read more

April 27, 2016
Bed bugs are not colour blind. They have their preferences of colour of bed linen in which to hide. Researchers have discovered that generally they try to avoid white, yellow and green; these colours are associated with sunlight and being exposed outdoors. Results did vary depending on the age and sex of the bed bugs tested, but in general they didn't like the colours white, yellow and green. They preferred stronger colours where they could better hide. Red and black colours were most likely to attract bed bugs. In fact: Female bed bugs prefer lilac and violet and Male bed bugs prefer red and violet. So if you select the romantic colours of red and black (and lilac and violet) to liven up the bedroom, you may get more than you anticipated; perhaps a bite on the bum! Link to research findings on bed bugs Recently The City of Unley Council endorsed its Animal Management Plan 2016-2020 . It's a good looking document and for completeness it includes a section on Other
Post a Comment
Read more

April 24, 2016
It is amazing how over time scientists and researchers discover or can explain things that we think we already know. I was intrigued to read that researchers have discovered that on our first day in a new and unfamiliar location (eg. a hotel room, camping, having a sleep over, ...) at night when asleep, one side of our brain remains alert to what is happening around us. It is always the left side of the brain. For humans it is called the first-night phenomenon . It had been known that dolphins and whales sleep with half of their brain alert and is known as unihemispheric sleep . The theory is that it is an ancient survival mechanism. It makes sense. I recall broken sleep (alerted by something) on that first night in an unfamiliar place. My only curiosity is that given the study of humans involved brain scans while people were asleep, how did they verify that dolphins and whales have unihemispheric sleep?
Post a Comment
Read more

April 23, 2016
This summer (just past) was a glorious season for capers. Huge crops is SA and Unley. You can pickle all parts of the caper bush; the leaves, the stalks, the caper buds and the caper berries. The best part is the caper bud. Home pickled buds are superb compared with the commercial muck. more about capers Here's a recipe. Pick a heap of caper buds; nice and firm. Sort through them and remove the stems. Rinse in a colander and then place on a tea towel and pat dry. Place the capers in a jar and layer with fine sea salt. Tip: place some salt in the base of the jar before you add capers. Use small to medium sized jars rather than a large one. Cover the jar(s) with its lid and shake to ensure even distribution of the salt. Remove the lid and cover the jar with a single layer of a paper napkin or tight netting (an old stocking or a piece of muslin) and keep in place with a rubber band. Leave it in a place where it will get some airflow, but not in direct sunlight – a bree
1 comment
Read more

Cyclists on the footpath

April 22, 2016
There has been concern and there will be growing concern about the legislated legality of cyclists riding on footpaths. There is some hysteria about the issue, but I feel that it is unwarranted. In a presentation to Council we were informed of how in some instances it makes sense; for cyclists to avoid dangerous narrowing of the road etc. Whilst the legislation permits it, I doubt that there will be a mass of cyclists hitting the footpaths. A few facts ... Fact 1: yes, it is legal (legislated by the SA Government) Fact 2: yes, Unley Council can ban some (or all) footpaths for cycling Fact 3: no, Unley Council can not enforce any bans; only SA Police can do this Fact 4: any footpath where a Council applies a ban must have a sign at the start/end of the prohibited section If bans were to be applied, then streets would be cluttered with costly signs; just like the 40kph speed signs. All things considered, I'm not that concerned by the new legislation. The majority of cycli
3 comments
Read more

April 14, 2016
I was annoyed by the story of Senator Stephen Conroy playing a computer game during a session of Parliament ... caught on 'film' by the press. Whilst on the subject I have been in the gallery at SA State Parliament a few times. my earlier blog about behaviour in SA Parliament A politician hard at it ...
1 comment
Read more

April 13, 2016
This is what I'm cooking tonight at home ... Chinese cumin lamb . I recently discovered the dish at the restaurant Kingdom in China Town, Adelaide. Absolutely superb; especially the chilli hit. So I'm trying for a repeat food experience at home. the Recipe Give it try. The mix of lamb and cumin is a good match.
1 comment
Read more 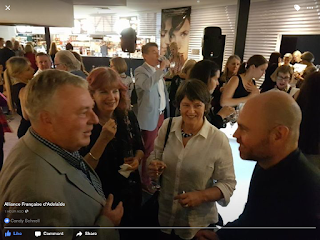 Last week I attended the launch of the Alliance Française French Film Festival. One of the sponsors of the French Film Festival is Peugeot and their advertisement of the 308 sedan was stunning; a must see action packed short film. People were talking about it afterwards. I suspect that sales of the Peugeot 308 will soar. The film screened was 'Rosalie Blum'. A lovely film, just so ... so French. A nice sting and a twist in the plot that took the audience to an unexpected ending. The After-Party flowed nicely with delectable nibbles and entertainment. A nice and somewhat familiar crowd of people. A great night. Had a cleansing ale afterwards and then caught a tram home. The photo below shows some of the beautiful people at the launch.
Post a Comment
Read more

April 11, 2016
After a recent holiday in Tasmania, when I returned home, I ordered a case of Raspberry jam from Hillwood Berry Farm (in Tasmania). Absolutely superb, chock a block full of seeds. Glorious. Best ever. It was too much for me to consume over the year so I sold some to friends (at cost price) to lighten the hit on my wallet. In return, a friend gave me a large jar of her home-made fig and chopped almond jam. I love fig jam and it was best ever. The almonds add that special touch. The fruit was still in large chunks and not runny. It was so good that I'm tempted to place some in smaller jars and submit as an entry to the Royal Adelaide Show in the food judging section. I won't, but it would have surely been a winner.
Post a Comment
Read more

Nip and a tuck

April 11, 2016
Last week I had what I shall describe as minor surgery on my tummy. A bit of a nip and a tuck. Sore for two days and now bearable; rapidly improving. It is amazing how the stomach muscles are used when you do other things like ... blowing your nose, coughing ... Tip: hold the tummy with one hand and then blow your nose ;) I know that it is not on the same scale, but I now have some idea of the after effects of a cesarean birth.
Post a Comment
Read more

April 11, 2016
Recently I attended the launch of the Spirit of Anzac Centenary Experience at the Showground in Adelaide. A wonderful exhibit and experience. I carried an iPod-like device and tagged exhibits that I found interesting and wanted a link for future reference. Excellent use of technology. My tagged exhibits can be viewed by this link Click here
Post a Comment
Read more
More posts