Showing posts from November, 2015
Show All

November 30, 2015
I have a new friend; actually two new friends. A couple of young Murray Magpies (aka. a Pee Wee or more formally as a Piping Shrike) have come to the garden and do regular patrols; hunting for spiders, moths or grubs and insects on the lawn. I started feeding them small bits of meat; pieces of chop or left-over sausage. That was a big hit and they have adopted me. This morning one flew at me in excitement to get some food. The dogs are not happy with this new friendship; so I will have to build a feeding platform head-high above the ground. As a matter of interest, there is confusion about which bird is displayed on the South Australia flag. Is it an Australian Magpie or the smaller Murray Magpie? More information from Wikipedia ... "The piping shrike is the emblematic bird that appears on South Australia's flag, State Badge and Coat of a Arms. The bird appears "displayed proper" with its wings outstretched and curved upwards. Although the image of the piping
1 comment
Read more

November 24, 2015
Smart sounds An article in today's Advertiser lists 15 words suggested by experts that we should drop from our vocabulary and then supposedly sound smarter. The words are: That Went Honestly Really Very Amazing Absolutely Always Never Literally Just Maybe Stuff Things Irregardless I could easily drop half of these words; but I do like the words Stuff , Things , Maybe and Absolutely . Maybe people would sound a bit smarter, not by dropping some words, but by learning to string words together a bit better. Stuff would sound a lot better; absolutely. Here's a link to the article
1 comment
Read more

November 18, 2015
The notorious hacker group called Anonymous is planning revenge against ISIS and its supporters for the murderous assault on the innocent citizens of Paris. They have started with hacking 5,500 Twitter accounts and changing #tags and publishing personal details of the account. Twitter accounts are being shut down. They have declared a cyber war on ISIS. As Anonymous says, they doesn’t have to act within the constraints of the law. Normally I would frown on hackers, but in this case I applaud their effort in a just cause; to avenge the death of innocents in Paris. Click here for more information Tip: be careful with the #tags or Anonymous may target you.
1 comment
Read more

November 17, 2015
With fruit, berries and tomatoes coming into season why not consider natural dyeing of clothes. Get that unique home grown colour into your clothes. Commercial dyes are not ethically produced and should be avoided. Buy a white T-shirt and experiment. Mulberries and raspberries are excellent for producing vibrant colour. A fresh juicy tomato will give a lovely orange/red splash. Alternatively, you may wish to add a splash of colour to your hair; perhaps a few raspberry streaks. Here's a link for more information
3 comments
Read more

It's happened before and it will happen again and again ... The Advertiser and Sunday Mail have scooped awards for what are called the prestigious SA Press Club Media Awards , winning more than a dozen top honours. Well done chaps. Let's face it, this is a one paper town and The Advertiser and Sunday Mail are from the same stable. Which other print media could win the awards in SA? If the Messenger was in the running, then again it's from the same Murdoch stable; and if it's a big story The Advertiser snatches it from the local Messenger. Well done guys; especially the story bragging about the awards. I look forward to the awards next year ;)
2 comments
Read more

November 12, 2015
hhmmm the Internet of Things aka. IoT People ask me, what is it? The term was first coined back in 1999. Interesting that it has taken so long to emerge and begin to become mainstream. It is certainly going through a hyper phase at the moment; of what is and what might be achievable. Within 24 months we will have embraced it or become entwined in the technology and taken it for granted, perhaps with some trepidation in the early stages. But, what is it? A few definitions will help to explain ... A definition: The  Internet of Things   ( IoT ) is an environment in which objects, animals or people are provided with unique identifiers and the ability to transfer data over a network without requiring human-to-human or human-to-computer interaction Another definition: Simply put this is the concept of basically connecting any device with an on and off switch to the Internet (and/or to each other). This includes everything from cell phones, coffee makers, washing machi
1 comment
Read more 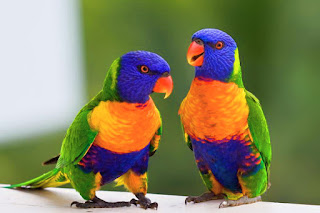 Wildlife Hospital The other night I found a young  rainbow lorikeet by the road side. It was not looking too good and had ants on it. I took it home and placed it in a small cage that I keep in the shed; for such emergencies. I was sure the bird would die that night. The next morning there was renewed life, but it still looked crook. So I took it to the Adelaide Koala & Wildlife Hospital @  282 Anzac Highway , Plympton. They provide a free service to native birds and animals. It is next door to a Vet who provides assistance. Check out their website  www.akawhospital.org.au Whilst there I asked for and was given a tour of the hospital. Patients in care were: A galah A magpie Many tawny frog mouth owls A kookaburra Many koalas, including the mother and baby shown on their website The hospital is a fantastic success and provides great service through the dedication of a team of volunteers. All of the medical equipment (eg. X-ray) is donated by hospit
1 comment
Read more

Use the bike lane

November 02, 2015
There is a crack-down on cyclists who don't ride in the bike lane. Police insist that if there is a bike lane then cyclists must use it. Fines range from $10-$130. Enjoy this video ... youtube video
Post a Comment
Read more
More posts