The semicolon tattoo is all the rage. It can be tiny or large. I've seen quite a few, in a few odd body locations and wondered what it means.

The selling point of the semicolon tat is that it is supposedly for a good cause and can be small and discreet; or as large as you like.
There is a social organisation called Project Semicolon and it aims to raise awareness for mental health issues. This is the origin of the semicolon tattoo.
According to the organisation’s official website, “a semicolon is used when an author could’ve chosen to end their sentence, but chose not to. The author is you and the sentence is your life;”.
People all over the world are getting semicolons tattooed on themselves to signify their battle with mental illness or show support for those who need it.
I'm tempted to get a tat, but may defer for a few years; instead, I'll make a donation to Beyond Blue. 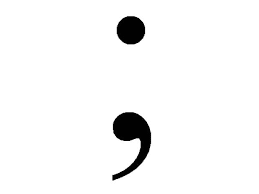