September 24, 2014
A few weeks back, I was on the tram to the city.
It was peak hour in the morning.
It was a wet day and the tram was packed.
It was like being in a can of sardines.
No need to hang on. The surrounding bodies kept you upright. No risk of falling if the brakes were applied.
It was humid and stifling and uncomfortable.
Passengers encroached heavily on others’ private space.
There was a lot of unintentional body to body contact.
Someone near me had cheap earbuds and was listening to some crap music; we all had to share the noise.
Someone near me was wearing a back-pack. With every tram movement I had the back-pack pushed into my side. Damn annoying. Etiquette should be that passengers are advised to remove back-packs and place it between their feet. These people take up the space of 2 people.
Someone near me was sniffing and snorting loudly. It was terrible. Disgusting. I suspect that it was the person with earbuds.
Next to me was a tall elderly man. Probably a grandfather (or a late starter). At his feet stood a little girl. A blonde cutie, perhaps 3 years old, dressed in pink with a tiny animal shaped back-pack. The man held her hand and every so often he picked her up. After a minute he would put her down again. She was a lonely sight, lost in a forest of legs, skirts, trousers and shoes.
The tram moved through the suburbs picking up more sardines to add to the can.
On the King William Road stretch I felt something. A hand had slipped into mine and was grasping with affection.
I looked down and the little girl had grabbed my hand instead of her Grandpa’s.
A bit of panic by me. What to do? What if her Grandpa noticed? What if someone else noticed?
I smiled at the little girl. It took some time before she noticed the mistake.
She quickly ungrasped, looked away and took her Grandpa’s hand.

Holding hands, unintentionally, ever so briefly – it made my day. 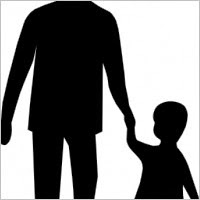