March 18, 2014
Now that the Festival and the Fringe has ended, it’s still mad March in Adelaide and time to start the film festivals.

Australia is celebrating its 25th French Film Festival.
It's the biggest film festival in Australia.

Did you know that the annual French Film Festival, screening around Australia in March and April, is also the biggest in the world outside of France? It seems that we love all things Française.
The Adelaide season features 45 films screening in 128 sessions over 20 days at the Palace Nova East-end. The range caters for all tastes: drama, animation, documentary, comedy, blockbusters and art-house (and a bit of naughtiness). There will be heaps of opening and closing night parties and other special events.
Adelaide is lucky to be on the end of the circuit of the Film Festival's events in mainland capitals. That enables us to use Australian reviews to help us select what to see.

Get along and watch a film.
(It's so hard not to say movie.) 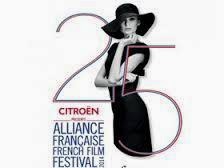