December 07, 2016
It was a huge night of protest at last night's public meeting to receive submissions on the Unley Central Precinct Development Plan Amendment (DPA).
There were in excess of 100 residents and most expressed their opposition to the proposed DPA that would allow medium to high- rise development in central Unley. In particular, there was absolute opposition to high-rise development at the Civic Centre; development that would tower over the Town Hall, Library and Church.
There were strong sentiments of 'make this an election issue'.
As the night progressed the opposition became more vocal.
Even Mayor Lachlan Clyne joined in; by giving a lengthy lecture to the protestors on the merit of the proposal and the process. That didn't, shall we say, go down very well.

I remain opposed to the high-rise development at the Civic Centre.
That can only happen if the draft DPA is approved by Council and sent to the Minister for Planning.

If Council seriously considers the submissions and comments from the residents, then it must agree to revise the DPA.
There are two ways forward:
I will be pushing for the latter.
Having heard from the residents we must respect their views.
We must reduce the width and extent of the DPA and importantly, we must reduce the height of development on the East of Unley Road.

Here are 2 photos taken at the protest meeting ... 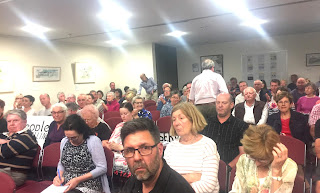 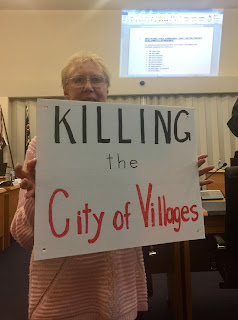